The Disappointing World of IMAX and LieMAX

IMAX is short for “Image Maximum” but, since 2008, they’ve been pretty lax on the maximum part.

It’s been 6 years since it first began, and yet today so many filmgoers are still unaware that this deceit is occurring. Just last week I told some friends that I planned to drive two hours to go see Interstellar in 70mm IMAX, and they were all puzzled why I didn’t just drive a few minutes to see it in “IMAX” at our local mall.

So I believe this topic is worth re-visiting, and this post is here to clear that up.

IMAX Corp. is a great case study of where film and business intersect and, since I have this soapbox to stand on, I want to highlight what the company is doing from a strategic management standpoint, and how it affects us film buffs — their patrons.

But first, to understand where we are, we need a bit of background:

To this day, IMAX’s 2D 15 perf (perforation) camera from 1976 remains the highest-resolution camera in the world — far better than any digital camera. IMAX is recorded on 70mm film which, intuitively, you’d think would result in twice the resolution of standard 35mm. With IMAX’s method it actually ends up being closer to 10x the resolution.

By removing the optical strip for the sound (they instead sync it separately) and exposing the image horizontally instead of vertically, they’re able to use a lot more real estate on the celluloid. Furthermore, on 35mm the image is often letterboxed and only a portion of the potential area is exposed. With IMAX, the whole image space is utilized. 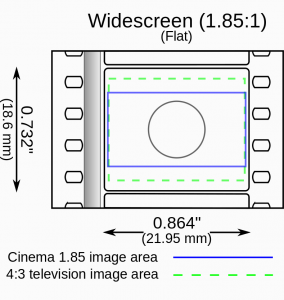 To grasp the clarity of this image, an HD television has 1,920 pixels of horizontal resolution. An IMAX frame’s estimated equivalent is upward of 18,000 pixels.

And IMAX doesn’t stop with image capture — their institutional theaters take advantage of their high-resolution footage by projecting it on screens that are more than 6x the size of a silver screen in your standard cinema, all while broadcasting a specially-made IMAX uncompressed sound mix for a truly immersive experience. With IMAX, everything is larger, crisper, and more beautiful. 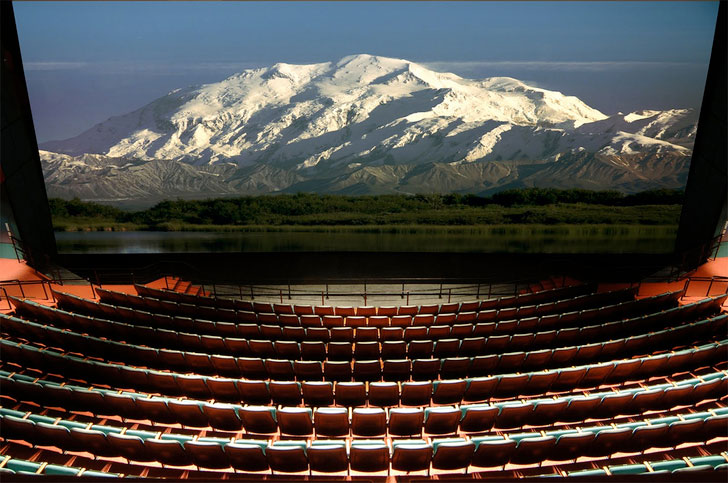 The First Rule About IMAX Club

The problem for IMAX Corp, however, was that they could only utilize this experience for a small number of museum films and select documentaries. The IMAX cameras are large, cumbersome, and loud — making dialogue nearly impossible to film. They also have short film loads only capable of holding 30 seconds to two minutes of footage at a time. The technology didn’t make any practical or budgetary sense to use in Hollywood.

Combine all that with the fact that 70mm requires twice the silver halide (silver futures are at ~$15 an ounce at the time of writing) as 35mm film and you end up with a film that costs thousands of dollars more per print to distribute. IMAX was cornered into a very niche market.

Things began to change in 2002 when the company developed the idea to up-convert new (and existing) Hollywood films to display in their cinemas, starting with a re-release of Apollo 13. After enlisting the help of computer scientists they developed a proprietary technology called Digital Media Remastering (DMR) to prep these selected films for viewing on their giant screens.

The vast majority (more than 95.4%) of films we’ve seen advertised as being released in IMAX have not actually been filmed in IMAX 70mm — they’re just being displayed in IMAX cinemas. Wikipedia has a comprehensive list of these films — mostly blockbusters and action flicks.

So how’s the quality?

“These up-conversions do not look anywhere as good as a movie shot in 15perf 70mm IMAX, but the argument is made that making a 70mm copy of the 35mm original looks better than a 35mm copy of a 35mm original as it loses less in the transfer and gains from IMAX’s Digital Media Remastering system.”

And that’s all well and good. These actions are simply smart business decisions by IMAX, and I’d gladly pay extra to see a film on an enormous screen over a smaller one any day.

If you care about the economics of up-converting a film, click for details.

IMAX Corporation paid for the conversion, and in return the studios agreed to give them 12.5% of the gross box office receipts on the IMAX versions.


“Rather than charging theaters $1.2 million for our technology, we started installing IMAX in them at no up-front charge. The theater still had to pay for renovating the physical space—typically about $150,000 per screen—but the conversion was now fairly affordable. In exchange for our technology investment, we received about 20% of the box office receipts for IMAX films shown on that screen.”

It wasn’t until Christopher Nolan’s The Dark Knight (2008) that a Hollywood film finally utilized the IMAX camera. A number of action scenes — a full 28 minutes of footage — were included in the print, with the rest being up-converted via DMR. The visuals were undeniably striking. 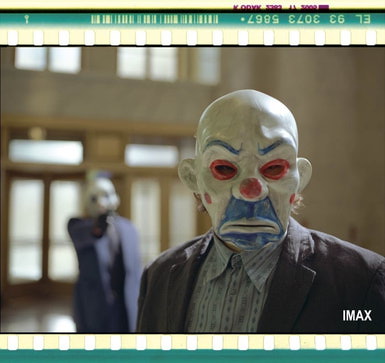 The IMAX screens accounted for only 1/46th of all screens domestically, but they produced nearly 10% of the domestic gross.

It was after this breakthrough success that IMAX tried yet another strategy to accelerate business — and it’s this decision that is the crux of our current issue.

In the wake of their success with The Dark Knight, IMAX Corp devised a plan to increase their number of cinemas. They began persuading movie theater chains, most often found in shopping malls, to retrofit some of their screens into IMAX theaters. To create these new locations, however, IMAX made a considerable number of concessions in quality. LieMAX features:

A far-cry from the 97 foot screen in traditional IMAX.

They remove the first 4 rows and move the screen forward a bit, but it’s still only marginally larger than a standard movie theater screen.

2. 1/9th of the IMAX image resolution

For the third Hobbit film in December, IMAX will finally start to roll out their new 4k laser projectors… to “1 or 2 theaters.” In the mean time we’re stuck with   1/4 the quality (2.07M pixels vs 8.29M pixels.) 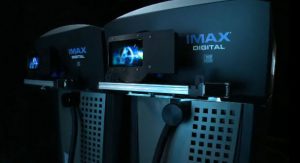 Even some of their legacy theaters use these 2k projectors in lieu of film ones, causing more quality problems:

“It’s the same resolution no matter how large the screen is. At our local IMAX theatre, a former 70mm location with a 72-foot wide screen that converted to digital, the difference is all too obvious, unfortunately.”

They use two of them to make the image brighter, but they still have another major problem:

This is known as the “Screen-door effect,” because the image projected shows the fine lines between pixels — like looking through a screen door. It’s particularly noticeable in the brighter areas of the projected image. 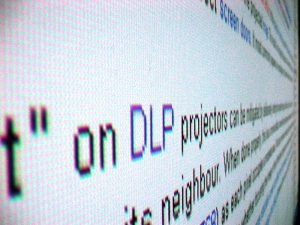 I’m fond of this description of the experience:

“IMAX — real IMAX — presents reality. Not reality as seen through a screen door.”

LieMAX screens are more rectangular, like a “regular” movie screen, ditching the more square-like aspect ratio of IMAX. Any footage that was filmed in IMAX is therefore cropped, removing ~40% of the image. 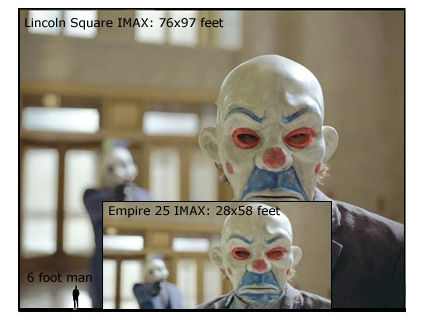 Although the sound is improved over a standard theater’s, it no longer has the uncompressed sound from a true IMAX cinema.

To be clear, I have no problem with IMAX Corp. opening mini-IMAXes in malls. If I were running the company I’d do the same thing. Just look at the effect its had on the stock price:

But I do have a problem with them not clearly advertising the difference, not maintaining a certain level of quality on these smaller screens, and then expecting customers to pay the same premium (or even more) for the lesser experience. It’s misleading.

Is it foolish for Bose to have $99 earbuds even though they’re known for $300 over-the-ears? No, it’s intelligent. But these products are labeled and priced accordingly.

I’m a film fan. I love going to movies. I’m IMAX’s key demographic. If they were just honest about what they are presenting, had at least a 4k projector (or ideally celluloid film), and charged me a reasonable increase on the ticket price, I’d go there every single time.

And so I drove two hours to go to their real IMAX theater, once. Every other time I go to the movies, they don’t see a penny from me. Everyone loses.