Why Tesla Will Soar (and Apple Will Continue to Struggle)

By John CanfieldMay 28, 2013Finance
No Comments

Apple used to be my favorite company. In the last few months I’ve seen them slip away to be resoundingly replaced by Tesla Motors. Here’s how and why that happened. 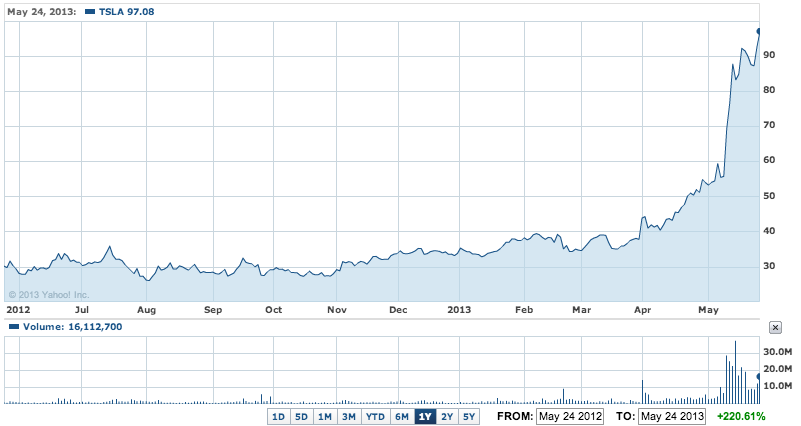 The fuel for this has been a string of outstanding news. They’ve:

Apple, many people think, is a little more complex. After all, they:

Tesla and Apple are so remarkably similar in what they do — they both sell stylish products directly to consumers that are simple in operation yet full of sophistication. Despite this, I currently see Apple as the polar opposite of Tesla in terms of sentiment. Jim Cramer said it best in April:

“Let’s just call it as it is, there has not been a single piece of good news about Apple for 300 points.” 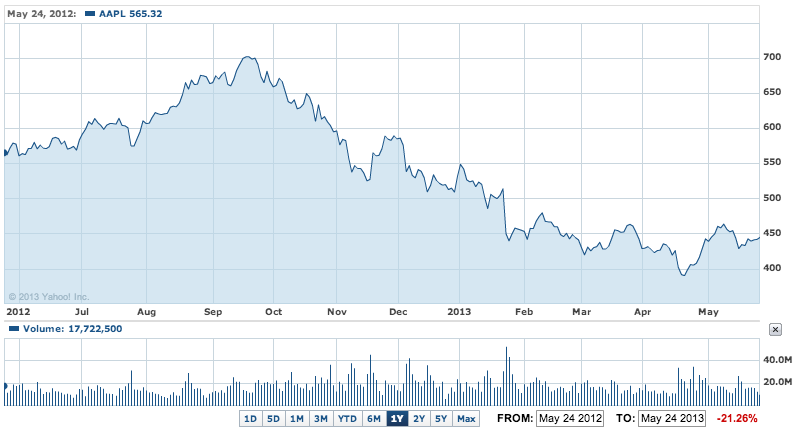 Many key executives are in-fact leaving, their marketshare is in danger, the iPhone 5 is missing several features, and they still haven’t released that much-rumored TV. The latest overseas tax debacle isn’t helping either.

Tim Cook, the current CEO of Apple, is outstanding at supply chain management. As COO of Apple he improved the company’s efficiency tremendously. As CEO, however, I worry about his ability to achieve the same level of accomplishments.

Thus far in his tenure he has yet to lead an overwhelmingly successful product launch. The iPhone 5 is selling fairly well, but there hasn’t been anywhere near the amount of buzz that we’ve seen in past launches.

Maybe he doesn’t push his management team to reach their full potential like Jobs did.

When Steve Jobs was presented with a prototype of the first iPod — a miracle of engineering that would revolutionize the music industry — he walked over to a fish tank and dropped the prototype in. He saw bubbles rise from the device and said “That means there’s still some space in it. It’s too big.”

I don’t know if Tim Cook will be that exact. 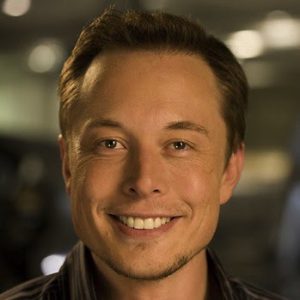 Elon Musk, CEO of Tesla, appears to be even more impressive than Jobs. I don’t say that lightly.

A champion of ingenuity, he not only leads Tesla but also private space company SpaceX, while sitting as chairman for SolarCity. I could write dozens of other posts on just those two companies alone.

Besides his ability to lead so many ventures, what impresses me most is his ability to build these companies out of nothing. He was a co-founder of PayPal, and then put his fortune into completely new businesses. That’s impressive.

There’s only one way you can create companies of this caliber: you need an uncanny ability to assemble a top-notch team and push them to be their best.

Having lots of money allows you to achieve many feats, but it can’t start an American car company on its own. You need a great leader with vision.

What truly separates Musk and his companies is the fact that they’re achieving great things both for the environment and the American economy. Tesla’s factory is based in California, everything is made in America, and there are zero emissions from their products.

Apple’s products are made almost exclusively overseas, and their servers run primarily off of coal-generated electricity. They’re currently working to change this, and they need to act quickly because it contradicts the values of a large portion of their user-base.

And, since we will run out of oil anyway, why risk the future of all life on Earth simply to delay sustainable energy?

Both Musk and Cook have been taking on more shares of their respective companies to demonstrate their confidence in the future.

There’s one major difference between Musk and Cook’s actions, though. Cook has been exercising stock options — which cost him nothing. Musk took out a $150 Million dollar loan from Goldman Sachs to buy up shares.

And along those lines, a real red flag for me about Apple’s future popped up when they announced what they would do with some of their enormous $145 billion cash pile — buyback shares.

The way I see it, the executives at Apple are helping themselves and not the company. They care about the stock price way too much and they are only improving it artificially. They need to fix the company, not the share price.  Manage the company first, the stock price will follow.

Apple has enough cash to buy Dropbox, Evernote, Twitter and Facebook and still have cash left over. I’m not saying they’d all be great purchases, but they need to focus on their products. They need to fix their cloud problem.

Sure, they make almost all of their money off of hardware sales — but people only buy the hardware because there is an ecosystem of software that comes with it. They need to enhance that if they want consumers to buy their devices.

What first triggered my sale of Apple in October was the fact that most of the iPhone users I’ve spoken to are growing frustrated with their phones. They want a bigger screen, they want more features, they want customizability. On top of that, the new Galaxy S4 is twice as fast as the iPhone 5.

And that’s the key issue here: it feels like Apple isn’t innovating.

One of the big Apple rumors is that they’re building a watch. While there’s a lot of potential for wearables, we’re a long ways away from them having legitimate promise. Apple’s products are supposed to solve problems and look good doing it.  There are very few people out there who are looking for a new digital watch that does the same things as their iPhone — but with less style, power or usability.

The iPad was something new and, while not for everyone, it solved problems for doctors, musicians, film crews, etc. A watch is just a solution looking for a problem.

We’re still waiting on their smart TV, but smart TV’s are already here. With the iPhone, Apple reshaped an entire market. With a TV they’ll already be chasing it — granted, as a giant and successful company. Hopefully it’s a service that completely cuts out the cable company and lets you subscribe to only the channels that you want. I’d buy that service. There’s still debate over whether that would even save consumers money, but since when do people buy Apple products to save money?

A low-cost iPhone could be a boon for business as well. If Apple wants to continue growing at the pace they have been for the last few years then they need to have a cheaper version of their flagship product that is accessible for people in developing countries.

The only thing that Apple still has going for it is the Mac operating system and the iPad. The Mac OS is fantastic, and the iPad is beautiful. Everything else is lagging.

Tesla, on the other hand, is on a roll. Electric cars sure are dorky, right? Not with the Model S. 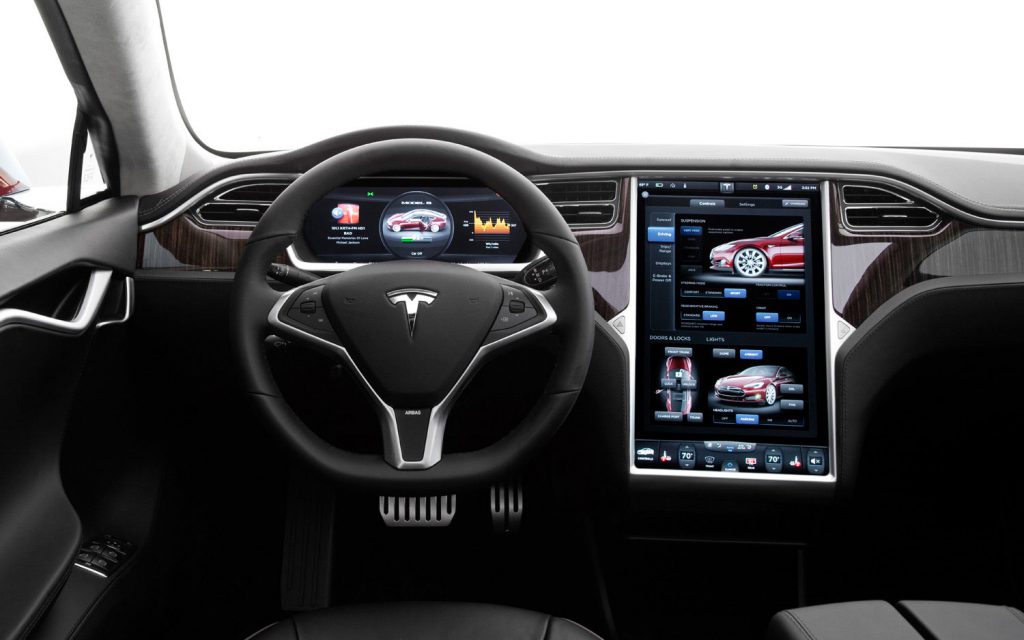 Yes the door handles are hidden, yes that entire roof is glass and, yes, that is a giant touchscreen. Other features:

Since it’s electric, there’s only 1 moving part in the engine. Compare that with the hundreds of parts in gas-powered autos. You never have to buy new sparkplugs, gasoline, or change the oil.

Owners can drive across the country, using the superchargers, and not pay a cent for fuel.

And when you pop the hood, there’s another trunk in there — it’s empty. That also helps with safety as an added crumple zone.

“Tesla Roadster owners can upload data from their vehicle and send it to us on a memory card and Model S owners can do the same via an on-board GSM system, allowing us to diagnose and remedy many problems before ever looking at the vehicle.”

Although many electricity companies are powered by “dirty” power sources like coal, it is still more efficient to burn it at the power station than to refine it to gasoline and transport it to filling stations. And if Tesla owners wish, they can also get solar panels to be completely off the grid. Elon Musk explains the technicals of this in a 2006 blog post.

You see, Tesla isn’t just a luxury brand, they are the future of economy cars in America. Right now Teslas are expensive. They’re not overpriced for what you get, but the average American certainly can’t afford an $88,000 vehicle.

Part of the problem is that Moore’s law hasn’t kicked in to make the technology cheap enough for electric vehicles yet. The bulk of the premium, though, is derived from the fact that Tesla is using the money it makes from the Model S to fund the development of future vehicles.

It makes perfect sense. The Roadster, Tesla’s original model, had a base price of $109,000. As the economies of scale increased and the technology advanced, Tesla was able to produce the Model S, which starts at $62,400.

Tesla’s 3rd generation vehicle, codenamed BlueStar, will be even cheaper. Elon Musk has confirmed that this car will cost between $30,000 and $40,000 and be available within the next 3-4 years.

Tesla’s future will have a wide array of vehicles and, if they can keep making them of great quality, they could be the leading car brand in America.

Interestingly enough, Steve Jobs once thought about making a car instead of the iPhone. Maybe someday they’ll be Tesla’s biggest competitor. But, frankly, the Tesla Model S already feels like it’s been designed by Apple. It’s simple, elegant, expensive, all-electric and it has a cult-like following. The only difference is that its cloud-based services actually work.

Now I’m not saying that Apple is necessarily a bad investment, I’ve just noticed that they’re no longer living up to their goal of creating outstanding products. It’s my opinion that the stock price will reflect this in the long-run. It won’t necessarily fall, but it will certainly struggle. They are transitioning from a high-growth innovation company into a value stock — and the value may be dwindling.

Tim Cook has indeed done great things like implement a donation-matching program and start to build iMacs in America. The fingerprint scanning rumor is interesting as well. A lot should be said about the fact that Steve Jobs appointed him as his successor. I’d really like to see him take Apple to new heights and make this even more interesting.

One final tip: invest early. Forrest Gump’s fictional investment in Apple in 1977 of $100,000 (estimated) would be worth $5.35 billion today. The earlier you invest in a revolutionary company, the better. You just need to choose wisely. I’m putting my money on Tesla.

Tesla has appreciated by an astounding 58%. Apple is up just over 10%. Expect to see a pullback from Tesla soon. 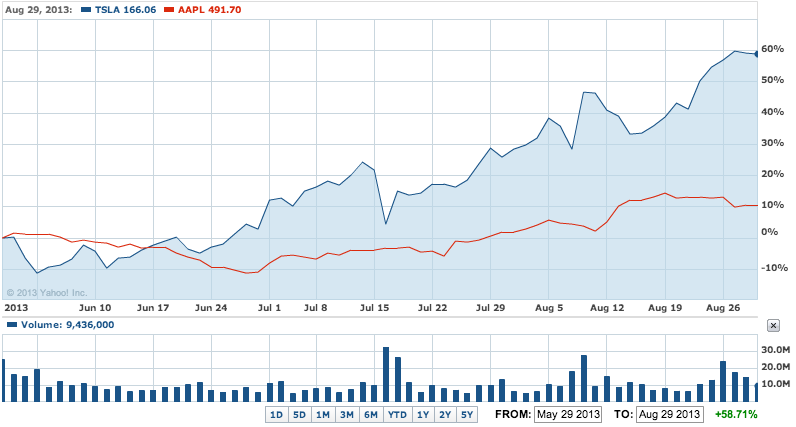 That’s a wrap on “Cardiac Hill”, my first sh

Had a great time in Chicago! Looking forward to go

Alright last cacti post for a while. Probably. Her

Still combing through photos from my Arizona trip.

Some 800-year-old art in the Sonoran Desert

More from the famous Boothill Graveyard outside of

Found a rattlesnake bridge. Even has a tail.

The best epitaph ever

2019, when you could actually go places.